Capable of controlling at least 100 qubits, the Fresnel analog quantum computer has been chosen in the framework of the pan-European HPCQS project. This choice, based on the technology of Neutral atoms, results from a joint Franco-German PPI procedure, won by the French startup PASQAL.

The seamless integration of quantum hardware with classical computing resources, creating a hybrid system, is an essential step forward to utilize the power of quantum computers for handling first practical applications. HPCQS will also create and provide a hardware-agnostic, comprehensive programming environment made in Europe for quantum computing and quantum HPC hybrid applications designed for end-users.

In order to reach these goals, GENCI and Forschungszentrum Jülich – with the support of the EuroHPC JU – have launched a joint procedure based on a PPI (Public Procurement of Innovative solutions) to acquire two quantum simulators capable of controlling at least 100 qubits. This PPI resulted with the choice of the Fresnel analog quantum simulator provided by PASQAL, a French startup. Relying on the technology of Neutral atoms arranged in 2D/3D arrays of optical tweezers and interacting in their Rydberg states. Each Fresnel will be coupled to a Tier-0 system and act as a quantum accelerator for specific workloads in optimization, quantum chemistry and machine learning. 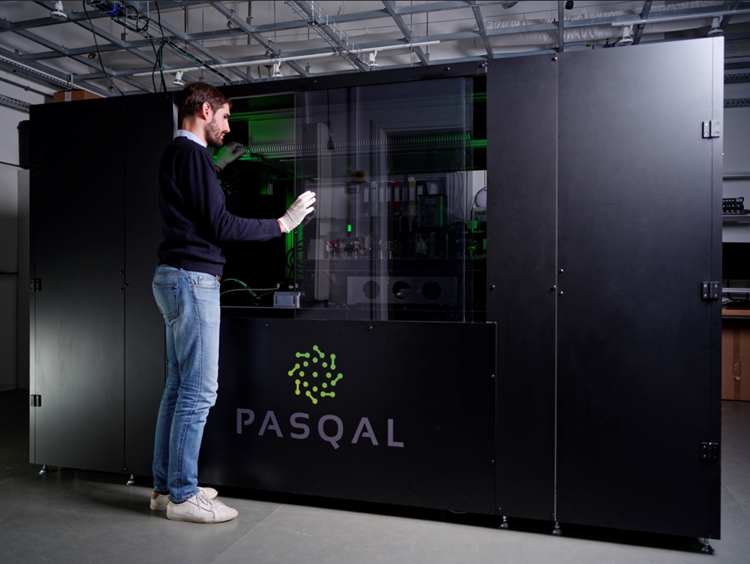 The two Fresnel quantum simulators will be installed during the second half of 2023 at CEA/TGCC and FZJ/JSC. In the meantime, PASQAL will provide remote early access to their inhouse Fresnel system in order to advance HPCQS activities toward the deployment of a full hybrid software stack including cloud access, resource management of hybrid workloads, tools and libraries, including benchmarking and certification/performance analysis. Engaging users in co-design will lead to prototype applications in machine learning and scientific simulations, featuring quantum algorithms to solve differential equations, material simulation, graph machine learning problems and optimization problems.

Anders Dam Jensen, Executive Director of the EuroHPC Joint Undertaking said, “The EuroHPC JU is delighted to be supporting its first quantum computing initiative and looks forward to seeing the new quantum simulators in action. Enabling access to quantum computing and leveraging the capabilities of this resource in conjunction with our existing classical HPC infrastructure will allow European research and industry to develop novel and pioneering technological applications and solutions.”

“GENCI and CEA are extremely happy of the selection of the Fresnel quantum simulator from PASQAL to make HPCQS now live. This acquisition performed in the field of the French quantum strategy and the HPCQS European project is a historical step for France and Europe in terms of assessment of quantum advantage. Coupled to our supercomputer Joliot Curie at TGCC, their unique 100+ qubits technology based on cold atoms will allow European researchers to assess concretely the potential of quantum computing on their scientific and industrial workloads” said together Philippe Lavocat, CEO of GENCI, and Jacques-Charles Lafoucrière, HQI, Program Manager at CEA.

“HPCQS is the ideal continuation of the plans and activities for hybrid quantum HPC computing, which we have started in Germany with JUNIQ, on a European level together with our excellent partners,” explains Prof. Thomas Lippert from JSC. “With HPCQS, we are the first in the world to realize the deep integration between HPC and quantum computing based on modular supercomputing and are bringing Europe to the forefront of research with this innovative technology.”

“The team at PASQAL is deeply honored that our Neutral atoms quantum computers have been selected by the HPCQS alliance to form the heart of the first European hybrid (quantum-classical) HPC infrastructure. We are proud to be part of a collaboration with such great partners and to contribute to positioning the European HPC community at the forefront of the quantum revolution. The role which PASQAL can play for the HPCQS alliance could not have been achieved without the strong support of the French public authorities and without their commitment to reach for excellence in quantum technologies, as formulated in The French National Quantum plan. That is why today is not just about the selection of the quantum computers of PASQAL. Today is about strengthening Europe’s strategic autonomy in quantum and HPC. We are building the HPC infrastructure of tomorrow, delivered by European champions in quantum and HPC” said Georges-Olivier Reymond, CEO of PASQAL.