This session was built around three talks and a panel:

The goal, through those talks and discussion, was to illustrate the impacts of the forthcoming quantum accelerators in the HPC landscape, from the infrastructure to the users’ needs.

The CEA talk presented the view of the CEA computing centre that will host the Pasqal Fresnel machine selected by the HPCQS project, to be installed end of 2023. After introducing some context elements about CEA’s implications on quantum technologies and its HPC infrastructure, the global French context and strategy was described. This broad picture explained the link between the French Quantum Initiative and the HPCQS project. Having said why quantum hardware will arrive in CEA’s computing centre – while a similar system will be deployed at FZJ/JSC – the talk elaborated on the foreseen technical constraints in terms of both hardware and software. The HPCQS project will help answer some of those questions and pave the way to the smooth addition of other types of quantum accelerators. 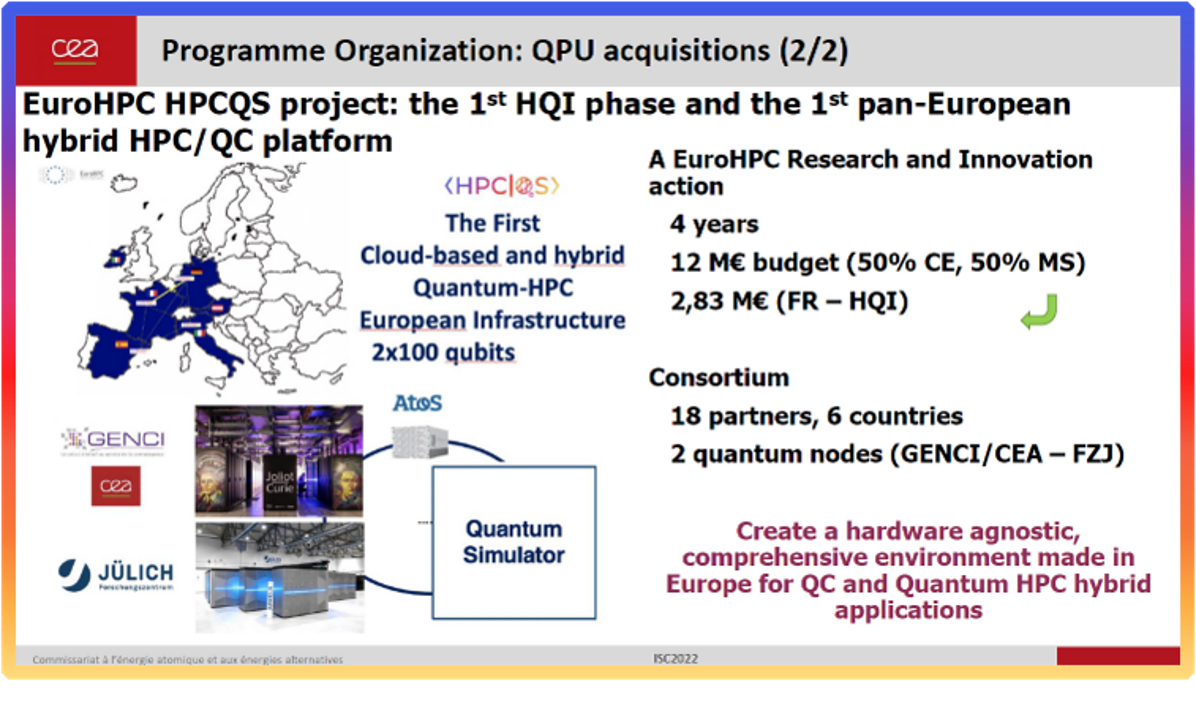 The SURF talk presented the problem execution of quantum applications that will require the tight collaboration between classical and quantum resources in a hybrid workflow. The orchestration and provisioning of hybrid workflows has challenges, many of which are still unknown when it comes to quantum computers. However, the proper implementation and optimization of hybrid workflows is critical to prepare for the quantum future and fundamental to ensure the classical overhead does not kill any quantum advantage obtained by the algorithms. In this talk some possible integration scenarios were shown and some of the current efforts, challenges and perspectives to integrate the (so far) loosely connected hardware were highlighted.

The University of Ulm talk presented “A quantum physicist's guide to the CPU and GPU versus QPU decision”: Daniel Jaschke gave a broad overview of the possible applications in terms of the simulation of quantum systems and explained how tensor network methods encode entanglement; then, he presented a methodology to relate the error of tensor networks to the error of quantum hardware. This framework helps to identify the regimes favorable to classical applications or quantum computation, and more importantly, it can be used to estimate how far the regimes will shift with the changes in the parameters, e.g. the gate fidelity of the quantum hardware. Applied to a quantum Fourier transformation, with this talk the University of Ulm gave an insight into the decision-making and related it to hybrid quantum-classical computation.